The Psychology Of Competitive People 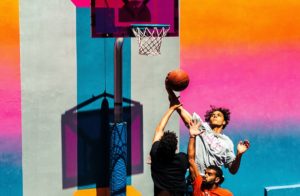 Life is a competition.

Of course, there are seemingly endless numbers of ways to compete.

And not everyone is competing for the same outcome. But there is no doubt that whatever you’re doing, you’re competing for some kind of result.

Often with yourself. And also with others.

Sports was a large part of my childhood. Basketball, football, baseball and later on golf. I love doing them. I loved competing. With my brother. With other kids in the neighborhood. With older kids. With friends. With other teams. All the way through high school.

Through all those experiences you start to learn about what makes yourself competitive. You also start so see the psychology of what makes a person competitive in general.

One of the traps of team sports is feeling that someone else on the team isn’t as driven to win as you are. It’s incredibly frustrating.

But what is likely occurring in these instances is the fact that you’ve discovered something that you’re personally motivated to win while the other person is lesser so. They might be good at it. They might have stumbled into the profession or the sport or whatever. But they don’t have the same level of motivation as you.

Odds are high that they do have something that they are motivated to do and do very well. And the odds are good that you wouldn’t be as motivated as they are at that thing.

I see this a lot with entrepreneurs and even small business managers. It’s difficult at times to feel that your team doesn’t care as much about the success of the business as you do. I would hope that nobody cares about your own business as much as you do. If you don’t care the most, the business is probably in trouble.

What seems to make people competitive is finding what they care about the most. It’s often referred to as intrinsic motivation. They’re motivated to be as good as possible at something. Not because other people asked them. Not because anybody else is watching. Perhaps not even because they’re being paid.

Other Forms of Motivation

Often the reason we are driven to compete in something isn’t known even to us. Perhaps it began before we even started forming lasting memories. I’m sure at some point in my early childhood, for example, I threw a basketball and was pretty good at it and wanted to feel good about doing it again.

I’ve read a few biographies of rockstars. It’s interesting, but I’d guess than more than half first got into music because they wanted attention from the opposite sex. They saw someone else that was a musician and saw the reactions they got and figured it was worth the effort and competition to do it themselves.

For whatever the reason, people seem to be competitive when they have discovered something that drives them. Without that drive they may stumble on things they’re good at. They may do things over and over, like a job, that they become good at. But unless they find some kind of motivation they’re likely not going to be one of those competitive people you come across in life. The ones that seem driven to succeed at all costs.

The Edges of Competition

You know competitiveness when you see it. You see someone putting in the extra work. At a sport. At their job. At whatever they care about. You can also see it in their body language. They hate the feeling of losing. They love the feeling of winning. Even when nobody is looking they celebrate the successes.

I see this often in the golf world. Someone that cares deeply about doing well in golf will make a long putt or hit a good shot and without anyone even watching they’ll give a little fist pump or smile as they put their club back in their bag.

But there are edges to competition. You’ll often see people take it too far. They will damage those around them if things don’t go right. They won’t know how to handle losing in a civilized manner. Sometimes these emotions are excused as, “the person just caring so much”. I’m not a big believer in that.

On the other side, there are people like Fred Couples, a professional golfer. He’s built a reputation as someone that is very laid back. Very casual. Kind of go out there and hit the ball and see what happens. This can seem uncompetitive. But those closest to Fred have also said that when he really cares about a tournament that he will put all his focus into it. It will bother him when he loses. He will celebrate internally when he does well.

Watch for the edges of competition. Know when you’re getting too close to one. See it in others. Surround yourself with healthy competition that drives you and those around you to get better.

One final piece on competition is the idea of cooperation. It’s easy to see that humans succeed most often when they cooperate. Even the quarterback on a football team only touches the ball less than 50% of the game. They can control just so much, but after that it’s up to the others on the team to perform well.

For example, a sales leader may have a basic sales competition. But they build a structure to make sure there is cooperation. They don’t want it to be cutthroat where one person is closing more deals at the expense of others on the team. That’s not good for the team overall and really not great for the individuals either.

Competitive people are usually the ones that have found something they care about deeply. They are good at finding a reason to care about what they’re doing. They realize that they might not start out good at something, but they find a reason to practice and become better.

People that aren’t competitive usually don’t look for their motivations. If they don’t like something, they move on. If they aren’t happy and want more they usually can’t figure out what motivates them deepest.

If you’re struggling with finding your competitive spirit, start by looking internally. Figure out what has mattered to you in the past. Look for things that you did when nobody is looking. Think about what you want from your future.

Understanding yourself is a key to finding the motivation that builds competitiveness.