The Power Of Body Language In The Workplace 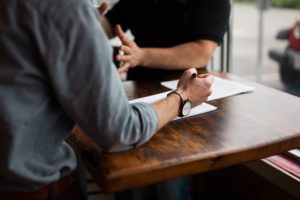 Humans are very good with body language. I experienced it with my daughter. She is three years old now, but for the first year or so of her life she never spoke. She made a few noises, but really couldn’t communicate verbally other than crying and maybe laughing.

And it’s not just that human relationship. All of us experience body language. Think about the number of languages spoken in the world. Not everyone understands all of them, but we mostly understand body languages. There are certainly subtle differences, but we could pick up a lot about each other just by observing body language.

As far as the workplace, there is usually a lot of verbal communication. There is more and more digital. But there is still quite a bit of body language. And it’s important to consider how you perceive others and how you affect others with your body language.

First impressions matter a lot. You can certainly overcome them to a degree, but it’s difficult. The first time we interact with someone will almost always linger in the back of our brains. It’s gotta be something from our history as humans. Ancient humans probably had to be very adept at figuring out new people. Are they a threat? Are they friendly?

And it’s still important today. The way a person acts the first time you meet them is a good indication of their character. If, for example, a new coworker introduces yourself and has poor body language, they are likely indicating something to you that will linger long term. Maybe they’re nervous, but if they react a certain way in an important situation such as a first meeting you can bet they will let their guard down even more in subsequent interactions.

Not expressive to the point of being over the top. But expressive to show excitement for meeting the person. Show them that you care about them and are interested in them.

2. Confidence As The Leader

Confidence may be the most attractive characteristic amongst people. Not just for romantic relationships, but for all types of relationships. Obviously we aren’t looking for people to be over confident to the point of being hurtful to others. But we appreciate when others are confident in themselves and those around them.

And also not to the point of being overly optimistic. But having a confidence that no matter what happens that things will work out and they and the team will be able to figure things out.

You want to project confidence in all your activities. As a leader, but even as an employee. You want your superiors and your coworkers to be attracted to your confidence.

But let’s say you’re running a meeting at work. Everybody is paying attention to you. If you’re uncomfortable, they will likely mirror it. It’s a way to try and diffuse the tension.

But you can also lead the way with confident body language. Bring them along with you to the good side.

You also see this in sports. It’s difficult to quantity. You may feel like the Body Language Police or something. But when a team of players loses momentum, body language can begin to suffer. And it’s contagious. One player slumps their head and all the heads go down.

Body language is vital to human communication. Even if we don’t realize it we’re using it all the time. Both in how we interpret others and how others interpret us. So it’s important to pay attention to it. It’s important to practice it. Also watch for how you perceive others and make sure you’re listening and using follow up information.