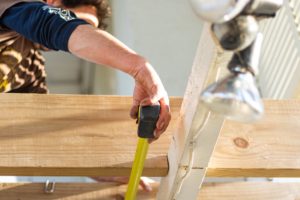 Jack Nicklaus was arguably the best golfer of the 1960s. One of the tournaments that he did very well in throughout his career was The Masters. He first won the event in 1963. He finished a distance second in 1964 before winning it again in 1965 and repeating in 1966.

That’s an incredible streak in a single event, but something very interesting occurred during that 1964 Masters. On the famous short par 3 hole #12, Nicklaus hit a shank. I can’t find what round it was in, but if you’re a golfer you likely just get shudders down your spine at the thought of the embarrassing shot.

If you’re not a golfer, a shank is where you hit the ball with the hosel of the club. Or the part of the club head where the shaft connects. Due to the roundness of the shaft, the ball shoots off to the right (for a right handled player) about 45 degrees from where you’re aiming.

In many instances a shank leads to a what is basically a 2-shot penalty. Plus it is very embarrassing since the appearance is wildly different from a normal golf shot.

Nicklaus got “lucky” with his shank. There was plenty of room to the right. He was able to compose himself and hit his next shot on the green and I believe he made the next putt for a par.

What is amazing to me is that you have the best player in the world playing at a course and tournament that he is arguably dominating at the time and he hits one of the worst possible shots right in the middle of his dominance.

The Worst Can Happen At Any Time

Even during a run of success bad things can occur. And not just bad things, but the worst thing imaginable. For a golfer, hitting the ball off the toe and into the water on #12 at The Masters would almost be preferable to hitting a shank. The shank is a very unnerving shot because you’re not always sure what you did wrong and the thought of doing it again can haunt you for a long time.

The worst can happen at any time.

It’s not that you want to sit and wait for the worst to happen. But it’s probably a good thing to prepare for it and consider that it could happen at some point in the future.

Ryan Holiday has been studying successful people for several years. During his studies he’s reasoned that it’s a positive thing to consider death. It’s something that will happen to us all. And taking time to contemplate one’s own death can often lead to choices during life that lead to more fulfillment.

Considering death can also help you become okay with the fact. Otherwise you might get closer to the end of your life and start to have regrets. Things you didn’t do. People you didn’t treat as well as maybe you could have. Thinking about death early in life can help you work through these thoughts so that when it does get closer you’re able to handle the situation.

And that can be the case with other scenarios in life.

Golf isn’t a life and death undertaking. But in the moment when you hit a bad shot such as a shank it can seem very demoralizing. But if you’ve taken some time to consider that a shank or another bad shot will likely happen at some point in the future, you’re kind of prepared for it.

Or you could work on a way to fix it before it even happens. Then you’re prepared to change your swing a little if you are to shank it in the future. This way you’re not as worried about doing it again and again after it happens once.

So why not prepare for it?