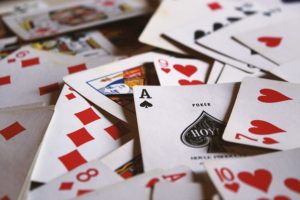 When I was about 10 years old I started getting interested in cards. Just the regular 52-card deck games.

My dad’s side of the family would always play poker at my grandma’s house after Christmas dinner. It was the one of the only times of the year that my dad and his brothers were together. The tradition went back before I was born and as a kid I remember wanting to be part of the game.

One of the things you notice as a kid is how adults would shuffle. They would snap the cards together mixing them all up between both hands. Then they would do The Bridge where the cards arch as they come back together nice and neat.

As a 10-year old, that was amazing. I immediate went to grab an old discarded deck, went to the spare bedroom and began trying to do the bridge technique.

The first time I tried it the cards flew everywhere. It likely took several minutes to collect all the cards. I was glad that I was in a room alone where nobody could witness the disaster. I tried again and again for probably an hour trying to figure it out. No luck.

My family then went home after the holiday get together. I found a deck of cards in my parents’ house and for the next several weeks worked on the bridge technique over and over again. So many failures. Occasionally I got close.

Then I remember getting it. Just once at first. Then a couple times in a row. I then went to my mom, who had no idea what I was working on, to show her. I did the shuffle and then the bridge and the cards flew everywhere. I was super embarrassed.

My mom encouraged me and after more practice I was able to perform the bridge with an audience. It took much longer to learn it than I thought, but now whenever I sit down to shuffle cards for a game I can do it without any thought. I’ll still cause a little mess sometimes, but not too often. And the embarrassment is never there.

Many businesses like the idea of content marketing. With text, video or audio. Or a combination of the three. It’s a great opportunity to build awareness for your brand. You can share content that entertains or educates an audience. That is value that earns that attention and trust with people. That can lead to direct and indirect leads for your business.

But many businesses are also worried about looking foolish with content. It’s not necessarily easy to create content. Nothing is really easy to do the first time you attempt it. In fact, it’s usually pretty bad. And this fear of creating “bad” content keeps a lot of businesses from even attempting it.

There is certainly a chance that creating content isn’t the right opportunity for you and your company. Maybe you’re stronger and more interested in some other marketing and branding channel. But content marketing presents an opportunity for most businesses. It’s an opportunity both for the chance to reach people, but also because so many are afraid to try it.

If you ask any content marketer or content creator if they like their early work they will likely tell you that they’re embarrassed by it. I look back at some of the first blog posts I created (and published) and they’re not the best.

It seems natural to look back our past selves and past work and cringe a little. What we thought was good at the time or even what we thought was bad turns out to be not very good. But that doesn’t mean it didn’t serve a purpose.

With each piece of content you create you’re building toward something. You’re improving your skills. In ways you know and even in ways you don’t realize. That’s how I look at blogging. I think things are pretty good now, but several years from now I’ll probably look back and cringe again.

You’re not getting any value from content marketing now anyway. There is nowhere to go but up. Even if you’re an established brand you likely won’t ruin your reputation with subpar content. People recognize when brands have good intentions. That’s what you want with your content effort.

And over time as you create more you’ll get better and better.

I remember sitting with two men several years ago. One was very successful in business. The other had kind of floundered in dead-end jobs. The dead-ender pointed out a mistake the successful businessman had made the previous year. Nothing crazy, but a poor business deal.

The businessman just said, “You know what, that was a mistake, but that’s alright. I’ve failed a lot, but I’ve always won a couple and that more than offsets things.”

That has always stuck with me. And I’ve tried to live by that motto. Even when trying something as simple as the bridge technique with card shuffling.