How To Motivate Employees Without Rewards 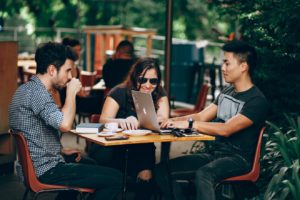 Is money even the best way to motivate employees?

I’m always intrigued to read about the Toddler Brain.

We’ve all interacted with toddlers. Some more than others. But even with a little interaction we learn that toddlers think differently than adults.

One example is how toddlers assume that others want what they want. That’s why when they’re trying to be nice they might hold their favorite toy out to you. They think that because they love their toy that you’ll love the toy just as much.

One interesting item with toddlers and kids that relates to management is the idea of rewards.

It’s common for some to reward children for certain behavior. And rewards often work. At least in the short-term.

But there are some interesting studies about the long-term effects of the reward system.

In one of the most classic studies on the topic, researchers asked college students to work on a puzzle while in the lab. Half of the students were told that they would be paid for doing the puzzle, while the other half were not told they’d be paid.

After a short break, the college students were left alone to do whatever they wanted, and they had the option of continuing to work on the puzzle or to do something else. Which group do you think worked on the puzzle for longer?

Contrary to what you might expect, the students who were not paid were the ones who voluntarily kept working on the puzzle.

It’s not that different from a situation where you ask your employees to do something. But it’s a little trickier because you are paying them to do a job. There are rewards involved. There are a few levels to consider.

The first step to take is to look at the entire process you have for bringing people on board.

We’ll get to the point you are now with your current employees, but first it’s good to look at the future and how you’ll bring people on board that are the right fit for what you’re looking for.

When you’re looking to hire people you want to look for clues that they’re intrinsically motivated to do the work you need them to do.

Let’s say you’re hiring someone to be a social media manager. It would be good to check their personal (but public) social media profiles. Twitter, Instagram, Pinterest, etc.

People don’t get paid to post content on their own social profiles. Some are more active than others. If you hire someone that is active the odds are good that they get internal rewards from the tasks. They would do it for free.

That’s the type of person you want to hire if possible.

With current employees you have to do a little work to figure out what they’re intrinsically motivated to do. That might mean adjusting their job description or position in the company.

Back to the social media manager situation, you may want someone on the team to do the job. It’ll be tricky to get them to do it if they’re not interested or intrinsically motivated to do it. You could reward them for it. Offer more money or some other kind of reward.

But they’ll do the bare minimum in order to get the reward. Just like in the study where the kids stopped doing the puzzle if they thought they would be paid.

You could also try different people in the position. Kind of a test to see who might be most motivated to do the job. They may not even realize that they are motivated until they give it a try. That would be like the kids that worked on the puzzle when they thought they weren’t being paid. To them, the challenge was the motivation.

Working With People That Have Been Extrinsically Motivated

One final thing to consider in all this is that you might have people on your team that have been raised with extrinsic motivation for their entire lives. Both by their parents or caretakers and at their previous jobs. They just won’t do things for the most part unless they’re rewarded.

If that’s the case you may need to figure out a reward structure that fits what they’re used to. But in the meantime you could also work to figure out ways to move them to a more intrinsic model.

I’m all for paying employees obviously. Everybody needs to make money. But I think it’s a win-win for both employer and employee when there is intrinsic motivation involved. Employees want to make money, but they also want to do work that challenges and fulfills them.

Think about your own work. You love making money, but you probably love certain aspects of your work even more than money. You’d do those tasks for free because you’re fulfilled by them.

Your employees are the same way. It’s just up to you to figure out their intrinsic motivations.