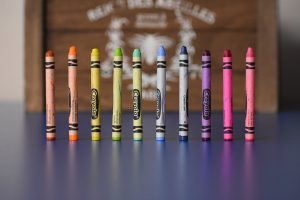 One of the common goals with social media marketing is getting content to go viral.

That means posting something that gets a lot of response.

Anger is a powerful emotion. Getting people riled up about something is a great way to get attention.

Just look at politics. There is always something viral going on in politics. It’s evolved to the point where everything seems inflammatory for the sake of getting attention and going viral on social media.

But you can still get viral content without having to go inflammatory.

Here was an example from a few months ago.

A quick side note…

I’ve been kind of following Nascar for the last few years. Paul Menard is from the town where I’ve lived the last 15 years. He’s kind of looked down upon and I like rooting for the underdog so I started getting interesting.

Jeff Gluck has been a beat writer for Nascar for a pretty long time for a few outlets.

This year, though, he did something unique. He struck out on his own.

He’s using Patreon for most of his financial support. And he kind of runs things from his website.

And he has the support of many people in Nascar including the drivers. He’s obviously built up some goodwill with his peers and those he sees almost everyday in the sport.

I think that reflects on his personality. He doesn’t really seem over-the-top. He seems pretty calm, collective and thoughtful. When he discusses a topic you feel like he’s taken the time to sort his thoughts.

Normally that type of personality might not be what you think of when it comes to viral content.

But Jeff Gluck got some viral content that went pretty crazy.

In March 2017, there was an incident with Joey Logano and Kyle Busch during the race. Kyle was very upset about it and after the race walked up to Joey and punched him in the face.

Now, the more I’ve followed Nascar over the years the more I’ve realized that the personalities from fictional stories like Talladega Nights are not really that over-the-top. Things can get pretty interesting between drivers.

Obviously this is fighting. That’s an inflammatory act.

But Jeff didn’t pump this thing by being inflammatory himself. When discussing it I think he actually was pretty calm about it. Looking at why each driver may have been upset. How that was natural when you understand the pressure these drivers are under to do well.

The video was obviously the big key to the viral result of the situation, but the way Jeff handled the situation also played a role.

I think Jeff Gluck was in touch with Nascar officials about the video before he published it on his own. And I think he let them use the video to publish on their accounts.

And I think all Jeff asked for in return was for a little credit for the video, which Nascar gave him above.

Jeff also seems to have published a slo-mo version on his own YouTube channel.

He also shared the video and posted about it on his site.

And I remember that on Twitter he was getting all kinds of requests from folks in the media asking if they could use the video. Jeff would always say “Yes!” and only ask for a little attribution or mention if they could.

By letting go of control over the content it took on a life of its own.

In a sense, the content no longer belonged to Jeff. But because of the attention it got he also received attention. And that raised his profile in the sport and really among a much larger audience.

So let’s focus on a few takeaways from this situation for you if you’re looking to create viral content.

Keep an eye on the interesting people: Kyle Busch and Joey Logano have been interesting characters in Nascar for a long time. For good and for negative reasons.

They’re both winners. They’re really good at what they do, but that’s not always enough to make people pay attention.

They both seem to have drama in their racing careers. They race hard. Joey especially seems to push the limit and it irritates other drivers sometimes. That made it not surprising that a driver would want to punch him.

And Kyle is known for having some temper issues. It was not surprising that he was the one that lost his cool and punched another driver.

When you’re looking for viral content it’s important to focus on the people or things in your industry that are interesting. Things that make people want to watch.

Emotions. Pushing limits. Different than everybody else. Individualistic.

Have the right equipment: When Jeff saw Kyle after the race he was ready within a few seconds. He knew something was happening and he had his smartphone ready to take the video.

For that to happen you need to have the right equipment. Thankfully all we need for video today is a phone.

But it might also be the still image camera. The voice recorder. Something to record the situation.

And odds are usually very good that not everything you record will go viral. You might have to encounter 20, 50 or 100 situations before you get that one big breakout piece of content.

Be familiar with that equipment: And it’s not enough to have the equipment. You have to know how to use it. That means practicing.

This gets back to the idea of quantity over quality.

Don’t have the mindset that you’re only going to have your video camera ready when you have a feeling that something quality will happen.

Have it ready all the time. Take all kinds of video or recordings.

Then when the magic moment does happen you won’t even have to think about how to use your equipment.

You’ll just do it.

Let people run with it: This was the big thing. I like what Eric Church says about his music. He feels like he “owns” it during the creative process. But once he releases it to all the channels he feels like it belongs to the fans.

That’s a good mindset. None of us really “owns” content. It’s just too easy to copy and share and all that stuff.

Jeff let go of the video. I’m sure a lot of people didn’t realize that he took it. But a lot of people were introduced to Jeff Gluck because this video was seen by so many around the world.

If you try to control every aspect of your content you’ll limit its reach. Let the world take it.

Be respectful: Finally, Jeff was respectful to Joey and Kyle. I’m sure those two weren’t thrilled that the video was caught, but that’s the world we live in today. And I think Jeff took the time to talk to both of them to get their sides of the story.

Again, he wasn’t inflammatory himself about the situation. He tried to see all sides. That’s important.

Viral content doesn’t have to be inflammatory. You don’t have to shout from the rooftops to get attention. You can take the Jeff Gluck route. It’s not easy. It doesn’t happen all the time, but you can get some great stuff that can raise your profile.