How Tech Boundaries Can Set You Free 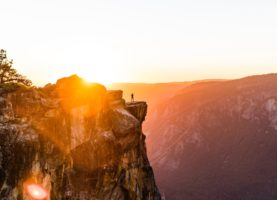 I feel pretty lucky to have come of age during the computer and Internet boom years.

My family first got a computer sometime in the mid ’90s. A few years after that we got the Internet, which was dial-up using our phone line and probably one of those AOL CDs that came in the mail.

That led to Yahoo chat and email and all kinds of wonderful things. I know that I went down a few information rabbit holes before I even knew that what I was doing was called “going down a rabbit hole”. I’d go online to look for an answer to a question and suddenly I’d look up and realize that an hour had gone by. And my mom was probably wondering why the phone line was busy.

Anyway, technology has been wonderful for my life. I feel like I’ve embraced it. I think of my dad when it comes to this point. He kind of bucked the trend of others of his generation. As many people age they often feel uncomfortable trying new technology. But my dad has always had a curiosity. I admire that and hope I can follow a similar path in the future.

I also remember as specific afternoon in college. I was sitting in my dorm room after a class when a friend from across the hall came over and said, “Did you hear that we have Facebook now?”…

I went fully down the Facebook and social media rabbit hole. I joined, created a profile, connected with friends and many others. I even bought online and self-published books about the early days of Facebook. I read all the articles that came out about it.

When Twitter launched I joined as soon as I could. I had no idea what it was for or how to use it, but I figured it out along the way. And I also followed a lot of people and watched how they used the platform.

Then in 2007, the iPhone was launched. In the two or so years after that the phone really became some sort of supercomputer. I had a few friends with cell phones in high school. Just having the ability to make a call from anywhere was mind blowing. Then in college just about everybody had one, but rarely did we text. Suddenly by our mid 20s we basically had a phone with super powers.

So my coming of age has been filled with technological wonders. And I wouldn’t trade it for anything.

But around 2010 I started realizing the pitfalls of going all in on these technologies. I remember it in the early days of those AOL and Yahoo chats. You’d sit there for hours chatting with friends. Then in the early days of Facebook you’d sit in your dorm room looking at all kinds of photos of your friends and what they were doing. Then with social media you’d sit there for hours looking at all kinds of content.

This is not necessarily a bad thing. It depends on what you want from life. We all only have so much time and so much energy. Giving it to technology takes away from other activities.

As with many other things in life, we have to set boundaries with technology.

We can do just about anything we want these days. But we can’t do everything.

If you want to get more out of your life you have to take time to figure out what you want to do. What you really want to do. This requires the painful realization that you can’t do everything. It feels like you’re shutting the door on many things. And in a way you are. But that’s okay. It was never going to happen anyway.

When you understand what you want to spend your time and energy doing it’s easier to set boundaries with technology. It’s easier to see that scrolling through social media feeds is taking precious time away from what’s important. And if you still struggle with the boundaries you have to eliminate the temptation.