How PEZ Changed Target Customers To Win Over The USA 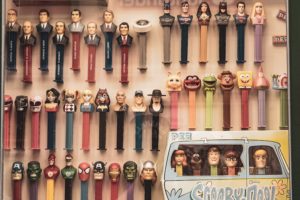 PEZ was something that seemed to be at the tail end while I was growing up as a kid in the ’80s and ’90s. Sure, those colorful dispensers were still around in the grocery stores and things like that, but I rarely remember any of my friends talking about them or collecting them.

We might have been the outliers. It seems that PEZ is as popular as ever. Baby Boomers and Gen X’ers seem to love the nostalgia of the dispensers they had as kids. And it seems that some younger generations, including my own, are getting into the PEZ world.

I was reading about the business of PEZ recently and it made me smile that PEZ didn’t start out to become an icon for kids. In fact, their initial business plan was much different. Their goal was to attract adults by offering a little candy that would make their breath smell better after smoking a cigarette. And it seems they even hoped to give adults an alternative to smoking.

Like many business ideas, that original idea for PEZ seemed to make sense on just about every level. Many people wanted to quit smoking. PEZ was designed to be convenient and it worked really well. It made your breath smell fresh and it gave you something to do instead of sucking on a cigarette.

But the business venture didn’t hit home with the target audience.

That wasn’t the end of PEZ, though. The candy started hitting home with younger consumers. And the folks at PEZ quickly caught on to the people that were buying their product. They saw the interest and changed their strategy. They started making the fun dispensers and the rest really became history in the decades that followed.

The story reminds me a bit of Daisy BB Gun. Initially, the company was making windmills for farmers. On the side they were messing around with BB Guns. They started offering BB Guns as a free gift to farmers that would buy the windmills. But after a few years it became obvious that the BB Guns had much more demand than the windmills. So the company scrapped the windmill side of things and went full in on the BB guns. That included heavy investment in marketing and in the mid 1950s it seemed that almost every kid had one of the guns.

One more story… David Gefffen wanted to be a movie producer. But he was young and his boss suggested that he go into the music industry because he would relate to the artists and the consumers. Geffen would soon become a successful manager for artists. He started his own record label, Asylum, which would go on to have huge success especially with the Eagles.

In 1980, Geffen started another record label. For five years the label did okay, but not great. Geffen realized that what he was doing wasn’t working so he hired new people to find artists that would click with what the audiences wanted. Those folks signed Aerosmith, who started a huge comeback under the Geffen banner. Another found Guns ‘N Roses. And yet another signed Nirvana.

So much about business is the competing nature of sticking to a plan and being willing to adapt. You can do market research. You can come up with a great new idea. But until people are handing over money you really don’t have a business.

PEZ is an interesting example. The original idea was a bust. At least in the US. But the candy still showed some early life with a different consumer. The folks at the company were smart enough to recognize it and they shifted gears. That takes a little bit of humble pie and a little bit of luck. But if you’re open to both it can work out really well in your favor.