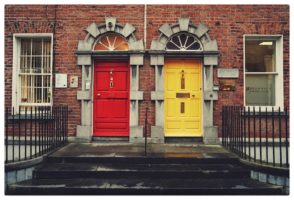 Content is being consumed at the highest rates ever.

Take the computing world as an example…

There was a feeling that when smartphones came out that Internet usage would remain the same as smartphone use would take desktop’s piece of the Internet pie. But what really happened was that desktop remained the same and actually grew while smartphone use also grew…big time.

People just spend more time on the Internet. That’s where they spend their free time or the time they used for other things like watching TV, hanging with friends or spending time with family.

Content is as popular as ever. But it’s also more fragmented than ever before. The number of platforms and channels is increasing all the time. Social media isn’t just Twitter and Facebook anymore. Video isn’t just TV anymore. Spotify is cutting into other podcasting and audio platforms’ share. There seems to be a boom in streaming platforms. Instead of paying $150/mo for cable we’re now going to be paying $150/mo for 10 different streaming options…

Here are some tips…

A single person is capable of a lot of things. If you’re a content creator, you’re capable of creating a lot of content. Especially if you’ve found something you’re good at and like doing for intrinsic reasons. But even if that’s the case there are some limits. You’re going to reach burnout at some point and that can lead to a big valley in production as a way to cope with the overproduction.

One way to diversify what you’re creating is to team with multiple creators. You can hire or partner or look to be hired by someone as a way to combine the skills of people with different talents.

If you feel you’ve reached the ceiling for what you’re creating then it’s good to start experimenting with other channels or forms of content. You might be surprised that you have an interest in another channel while also continuing the same level of production with your current channel.

Many people find success with a channel and then lose interest. They continue because they’re good at it, but also begin using the time they have now, due to efficient production in the first area, to experiment and find another outlet.

This would be another option to bringing on another creator.

Spend 80% of your time doing what you’ve been doing. Then spend the rest trying 3-4 new things at small scale to see what else you might have a knack for.

If you feel your content is getting a little stale then start looking for other insight. Go to people that are different from yourself and interview them as a way to diversify your content. You might find that you agree on lots of things. You might also learn things from each other.

One key thing to remember is to focus on your own learning. When you go into interviews with the learning mindset you usually come off as a good host and the content is more valuable for listeners.

The social channels want their users to stay on their platform for as long as possible. Don’t fight against that. The platforms will make changes to get people to stay. The more you fight, the more you lose.

So post natively with content that helps keep people on the channel. Post snippets of your blog posts on social. You can still provide value this way and increase brand awareness.

One great way to diversify is to give content away for free that others are charging for. One great area for doing this is to focus on all the courses that people are charging for online. Someone might create a course that costs thousands of dollars. It might be worth it. But it’s also an opportunity to provide huge value by doing the same and giving it away for free.

Another area is local news. Local news sources like newspapers, radio and TV are struggling to monetize their content. But local businesses could hire those reporters to do the same job while giving away the content for free on their own channels. It’s just a form of branded content.

Start testing new formats and styles for your content. If you’ve wanted to do something a little different then test it. Don’t worry about backlash. People are pretty forgiving and pretty forgetful if you try something different.

Imagine a music artist that has found a niche. They release a series of songs that doesn’t stray too far from that, but they try something new as a test. It might fall flat. That’s fine. Go back to the tried and true formula. Then wait a little bit and test another new style.

Testing is fine. Trying a big bang change has a little more risk.

When you’re channel testing try really new channels. For example, new social media channels still come out fairly often. Most fail, but about once a year one will hit really big. It pays to be a first adopter. But in order to do that you need to be willing to test all the new channels and have that work forgotten on most in order to reap rewards from those that fail.

People change channel preferences once in awhile. But many also hang on to their favorite channels. Millennials are pretty dedicated to Facebook, but many also experiment with Instagram. Some people still read the newspaper and will continue to do that until they die.

You can still find opportunity in older media channels. If it’s not too expensive, look for opportunities with the older channels to reach more people with diversified content.

Diversifying your content isn’t easy. Mostly because we find what we’re good at and get comfortable. And that’s not a bad thing. Going all in and creating as much content as you can is a good thing. But there is opportunity in diversifying your content. Hopefully the tips here can help you find the right way to do that.