6 Ways To Boost Your Positive Thinking 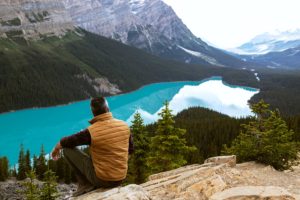 Bill Rosenberg is a person I hadn’t heard of before.

But I recently signed up for Kindle Unlimited. And Bill’s autobiography about his life, including Dunkin’ Donuts, popped up on the suggested list. So I had to dive in and read it.

Many things stood out about Bill the person and Bill the businessman. One that really jumped out of the pages and one that Bill mentions specifically throughout the book is his belief in the power of positive thinking.

He believed in positive thinking for himself. He also liked to surround himself with positive thinkers. Now, he wasn’t optimistic in every sense. And he didn’t want those types of people around him. He wanted a unique mix of optimism and realism.

He didn’t want to be foolish, but he also didn’t want downers on his team. He wanted people that would take on challenges and find the one solution instead of the excuses.

If you’ve been struggling with positive thinking, here are a few tips for boosting it…

1. Training For The Positive

Every time you catch yourself saying something negative about a situation, immediately force yourself to identify five positive things. This builds a habit of finding the good in nearly every situation.

There is a reason for the 5:1 ratio. It’s the optimum ratio for positive thinking and a healthy mindset. The study was for how to manage people. But it’s also important for managing how you treat yourself. It’s really easy to identify the negatives in our own lives. After all, humans have a negativity bias. It helped our ancestors avoid predators, but today it seems to lead to very poor mindsets.

Positive thinking, as Bill Rosenberg found, is a key to success. But it doesn’t happen overnight. Bill built his over a lifetime and honed the skill. So it takes time, but building the habit can be done relatively quickly.

I met with a wonderful man in his 80s some years ago. Two friends of mine and I were looking to lease farm land from him for hunting. I met with the man and we had a great discussion. I asked if he would like to meet the other two before allowing us to hunt.

He said something to the effect that he wasn’t too worried about that because birds of a feather flock together. Obviously I had heard the phrase before, but this man trusted his lifetime of experience. He knew that most times when you meet someone and get to know them that the people they spend time with are likely of similar personality and mindset.

He seemed to like and trust me and as a consequence also liked and trusted my friends without even meeting them.

If you’re struggling with negativity, look to cut anybody that is being negative with you consistently. Then look to spend more time with the positive people you know. This can be harsh and difficult, but what other choice do you have?

Reading biographies is one of my favorite pastimes. I love the ones that simply tell the story of a person’s life. As little bias as possible and as few lessons as possible. I just want to read the story and take away what I want to take away.

One thing you’ll also find by reading a lot of biographies is that people have gone through all kinds of struggles. The most unimaginable things. It can make you feel sad on many levels, but it can also make you realize something important:

You’re likely not facing a challenge that is worse than something somebody has faced before.

We often have a very short-term memory when it comes to our own lives. You might even think, this has never happened in my lifetime.

Well guess what, your lifetime is incredibly short. Humans have been around for a long time and it probably wasn’t that long ago when someone (or many people) were going through something very similar and probably worse than what you’re going through now.

I find that reading helps me find positive in the world.

Big goals are wonderful. But you have to put the proper expectation on them. Not that you can’t reach them, but that you likely won’t reach them tomorrow or even next year. Five years? Maybe. That doesn’t seem all that bad, but during the long days of working it can seem like you’re failing.

They often say that Nashville is a “10 Year Town”. Meaning, if you’re a songwriter and you go to Nashville to write that it will take you at least 10 years to find any kind of success.

I just watched an interview with Paul Overstreet. He’s one of the most successful songwriters of all time. He moved to Nashville when he was 18 years old. It took him over 10 years to get a hit. His story is very common and most flame out before even getting close to that 10-year mark.

In order to make it through 10 years of long days, you have to change your focus. You have to create smaller goals within your big goal. For Paul, his big goal was probably to get a hit. But the daily goals were probably to write one song a day. Just write a song today. That is doable. And it boosts your positivity when you accomplish that small goal day after day.

You won’t be positive when something happens. Things will happen when you’re positive.

If you’re reading this then what you’ve been doing probably isn’t working. One thing I see often is that people put qualifiers on their lives. They say they’ll be happy when [fill in the blank] occurs. That’s a losing battle. You probably know this already because you’ve been doing it for years.

When you’re positive with what you have now it opens you up to all kinds of wonderful things to happen. Things you can’t even imagine or plan for.

Music has very beneficial qualities. And walking also provides a boost. Put your headphones on and go for a 30-minute walk each day. Find some nature if you can. Trees, streams, wildlife, etc. I can’t explain exactly why this works, but it builds a positive habit that builds positivity in other areas of your life.

Bill Rosenberg hated excuses. He hated being around people that brought him down. The reality is, people don’t want to be around those that are throwing pity parties. They don’t want to be around people that try to bring others down. Who wants that? Yet we often fall into this trap. The only way out is some serious habit building. Hopefully these tips will help you get back on the right track.