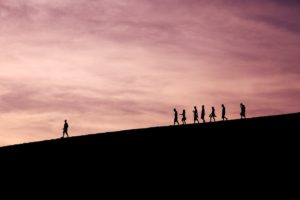 Right now, influencer marketing appears to be underpriced. There will likely be underpriced opportunities in the space for several years. Maybe some will be overpriced, but it’s an opportunity.

Influencer marketing is not new. It comes in many forms.

I’m a fan of golf and in the 1960s golfers really started taking advantage of their influence by parlaying their exposure into lucrative business deals. The stars of that period set the standard of attempting to make 10x their on course earnings off the course. In other words. A pro back then might make $100,000 on the course, but they would make $1 million off the course using their influence.

But it all depends on value.

NASCAR is another area where influencer marketing has been important. Arguably the most successful driver of all time, Jimmie Johnson, is still at the top of his game, but his sponsor for the last 18 years just backed out.

Here are a few different types of influencers. Hopefully you can find the opportunity for your company.

Just an expression here. Don’t mean to insult any influencers out there by calling them fish, but it’s a timeless phrase.

Big Fish are those that are big in big industries. But they can also be big fish in smaller industries.

In another area, if you want the big fish on Anchor you’ll have to pay top dollar…relative to Anchor.

So there are a few different strategies here, but basically you’re going to big. You’re going after the person with the most exposure in whatever area they’re big in.

I remember when Tiger Woods got a $40 million deal in 1996. People thought Nike was crazy. They soon realized that they were underpaying so they upped it to $100 million a few years later. Tiger was a big fish, but there was still incredible value even after paying top dollar.

These would be the rest of the pack in whatever the industry is. The 2nd and 3rd tier players. They’re still big. They’ll still stand out more than anyone else at times and they’ll consistently be in the mix for attention.

You won’t have to pay as much, but you also won’t likely get as much exposure unless something crazy happens. It’s not really a sure thing.

Another one that’s interesting is the emerging influencer. Maybe someone that has the potential to be big, but isn’t there just yet. And people are still kind of sitting on the sideline waiting to see what happens.

Tiger Woods was never really an emerging fish. Nike knew what they had.

But sometimes there are emerging stars. Those that should be all world at what they do, but that for whatever reason haven’t gotten there yet.

If you can identify an influencer on some channel or in your industry it can really pay off to jump on board especially if you can work out some kind of deal that is performance based.

We’ll step away from the fish analogies for a few other types of influencers. Some will fall into the above categories, but we’ll take a little different angle.

Idols are those that are put up as almost god-like. Rockstars used to be idols. Pop stars still are. Athletes are seen as idols. Even some political figures and businesspeople are seen as idols. Steve Jobs probably fits the category.

They have influence. Sometimes incredible influence. It again all depends on the value. Are they undervalued or overvalued?

For Lowes, Jimmie Johnson must have been overvalued, but perhaps for a new brand he will be very undervalued.

Journalists, authors, etc. These are influencers that people view as respected, trusted. It could even be a blogger or online reviewer. I would argue that we really do trust online reviewers. The more detailed they are the more we trust their opinions.

This could be an area of opportunity for businesses especially with the emergence of bloggers and podcasters. Vloggers seem to have almost idol status in some cases, but podcasting and blogging still have some incredible value. I think we’re seeing a big uptick in brands connecting with podcasts.

That’s a form of influencer marketing.

For businesses, these mentors can be very influential over their teams. Suggesting software, tools, books, etc. All kinds of things that their teams will do without question.

An interesting one here.

If we found out that the main competitor was doing something, including going with a certain vendor, we paid close attention and even adjusted dollars accordingly.

Sometimes if a business gets one company in an industry they can get all the other similar companies because those companies are influenced so much by wanting to keep pace.

Similar to the mentor type here, but I thought it was worth pulling out on its own.

Think of the last time you wanted to eat at a new restaurant.

Where did you go for information? Did you ask someone?

You have to pay attention to those alpha dogs in the packs out there. The moms that have sway in their families and friend groups. Shoot them a free meal or two and they might just send you tons of new business.

We all hate them. We don’t want them to influence us.

I’m not claiming that I know how to use the for business purposes, but I’m sure there is a way because they hold so much attention of the online world.

Just kind of a catchall with this one. Obviously this could fit with a few others categories here, but it’s worth pulling out to its own. It’s not just individuals. Brands have influence. Sometimes even more than individuals.