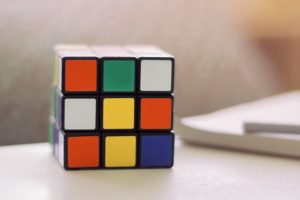 I find it’s above average ability in a small task.

In early 2009, I saw a video on YouTube about how to conquer the Rubik’s Cube. I watched it once. Then I watched it again. Finally, I committed to learning how to do it. Not just once, but consistently.

Every night after work I’d go home, have dinner, write a blog post and then spend time learning the patterns of the Cube. Every night I got a little better. Then the steps came easier and easier. I would say that after about 20 days I had the Cube figured out pretty good.

That fits really well with the theory that you can get pretty good at just about anything in 20 hours.

That’s especially true if you’re starting at zero. Putting 20 hours into anything gets you pretty far. Certainly much farther than all the other people that have no experience. You might not be an expert, but you’ll stand out.

After getting pretty good at the Rubik’s Cube, I took it into the office and put it on my desk. Once in awhile, people would walk in and notice it. They would ask if I could do it. I would tell them I could. Then they would usually ask me to show them. In about a minute I’d solve the Cube and they would smile.

Nothing major, but it seemed to have an effect…

It was something for people to remember. It was unique. It showed at least a little ability in something. It wasn’t something many other people were doing so it stood out.

It turns out that being interesting leads to more and better relationships. Not just romantic, but professional and friendships and all kinds of relationships. Even with your family and kids.

A struggle in life and relationships is feeling like you have nothing to talk about.

If that’s the case, try putting in 20 hours learning some quirky little thing. Like the Rubik’s Cube. It doesn’t really matter what it is. Learn one thing. It’s really a short amount of commitment. If that’s a failure, try something else.

At worst you lose 20 hours. The equivalent of watching 2-3 seasons of Friends on Netflix.

At best, you become a more interesting person with better relationships.