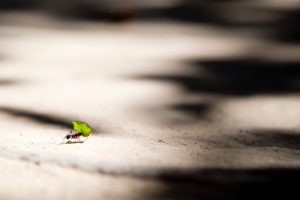 Many people that want to start a business search for big ideas.

It’s something that’s often pushed on us as we grow up.

There are all kinds of sayings and cliches that educate us on the benefits of thinking as big as possible.

Is there some truth to it? Sure. Some people do fall into the trap of not reaching their full potential. Maybe we are capable of doing even more. But who’s to say?

The more I look at successful people the more I realize that it’s the little ideas that lead to big things. Many entrepreneurs started with the smallest of small ideas and pursued those out of curiosity or passion or whatever only to find that they were onto something bigger than they imagined.

A great movie that came out a few years ago is The Founder. The book is just as good. It’s about Sam Kroc and how he grew McDonald’s throughout the ’60s and ’70s. It was a simple idea: fast food. Imagine being the McDonald’s brothers back in the 1950s and having the idea of giving people good food as fast as possible. It’s not that big of an idea. It probably even seemed foolish to many people.

Restaurants weren’t new. Food service wasn’t new. Fast food probably wasn’t even new. People certainly didn’t know that they even wanted fast food. It was just a small experiment that started showing some potential after many years of persistence.

Sam Walton is another example. He wanted to own a retail store. His own store. That’s it. He wanted to have a successful franchise retail store in a small town in middle America. And he succeeded. Then something interesting happened. His landlord noticed that Sam’s store was successful so he denied a renewal on the store’s lease and had his son start operating the store. That left Sam without a business.

Sam took it as an opportunity. He had been learning about the discounting retail world. Nothing special. Just offering things people wanted for the lowest price possible. So he opened a new store and pursued that small idea. It took awhile, but Walmart became the largest company in the world.

So if you’re looking to change the world, think small.

It’s the likeliest path to success.