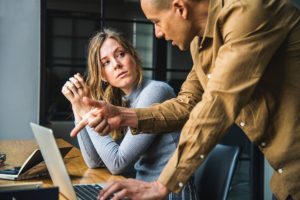 This is one I haven’t thought about digging into before, but it’s an interesting aspect of social media.

How should you handle a situation where you might need or want to have multiple people involved with posting material on your social media accounts?

It’s a good question and there have certainly been companies that have been in this situation.

I’ve seen customer service Twitter accounts where different people answer questions and then leave off with a signature, which is usually their initials.

And there are certainly business accounts where multiple people publish under the brand’s general account.

Let’s dig in a little bit on the possible situations and figure out what’s right for your situation.

Multiple People On One Account As One Brand Name

One way that businesses handle this is to publish under the brand name. The updates look like they’re coming from the brand and not from individuals.

In this situation I think it’s a good strategy. You can create an understanding with those involved to help hone in on a voice that works best. The way to do that is to communicate what your brand stands for and to hire people that have the same world views as others in your company culture. Usually when you hire correctly, in a way that matches your culture, then people are more likely to share content that fits with your brand’s message.

At first I thought this situation might be best for large companies. Those companies have the money to invest in social media. They see the value and need for frequency and because of that frequency they need to have multiple people on the account.

But I now think that this could work for smaller companies as well. Imagine a local dentist office with a handful of employees. Why not have multiple employees helping to keep the updates rolling? The dentist or dentists could share some information on the account and so could others including the office manager and others. As long as everyone is on the same page it can be a great way for the dentist office to gain followers and exposure with lots of great content.

But there is also a different way to do this…

Multiple People On One Account With Their Own Signatures

In this scenario the business still has multiple people working on one account (Twitter or Facebook or YouTube or whatever), but when each person posts and update they add their signature or some indicator that it’s them as an individual.

I’ve seen this done in a few different ways.

One way is in a customer support setting. GoDaddy is one company that does this, but there are many others:

We are actively working to resolve an issue that is preventing some users from accessing their email. We will post issue updates here. ^M

You can see the little ^M on there. They have other tweets and updates with those same signatures. It’s a way to let people know that it’s one person behind this account that’s providing this update and that others provide other updates.

Here’s one from Rand Fishkin of Moz. He recently started posting more on Instagram, but he posts on his wife’s account. He uses the hashtag, #randtookthis, as a way to let followers know when it’s him versus Geraldine. I thought this was a clever way to do it.

I like this way of doing things as well. I think there is a time when your company could use the general brand name on social media, but I thin that way can also limit personality on your account.

That allows for some more personality to come through in all kinds of updates.

Let’s go back to the dentist scenario. Instead of just posting under the dentist brand name each person could add a signature and the followers would know who was who.

Why Not Have Each Person Have Their Own Account?

This question popped into my head…

I think it’s good to look at this situation like a sports team. Each individual on a team has their own skills and abilities to build a community on social media, but if they all put their effort into one account they have a better chance of growing some really special and big.

This one is fairly common in the business world. Again, with all the frequency needs out there in order to grow an account you really need more than one person in charge of social media especially if you have multiple accounts.

With one person in charge of each account they can put their entire focus into learning the community on that channel and they can focus all their energy on growing that channel.

If you have this setup it would be good to make sure there is a healthy level of competition, but also collaboration. One person might discover something on Twitter that the others can use on Facebook and Pinterest.

Competition can be good (Facebook has more engagement than Twitter!). It can drive people to do better, but don’t let it get out of Hand. You want those individuals still helping each other out. They’re still on a team, the business team.

If you’re struggling to get enough content on your social media accounts it might be time to look at having multiple people contributing. Maybe it’s not something you’ve thought about, but businesses have really been doing this for awhile in different forms. Hopefully we’ve kind of walked through the different scenarios and options and there is one that is appealing to you. Take that info and try it out for your business and it should help to grow your social accounts, which can bring in more business.