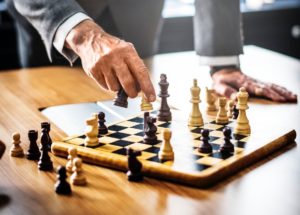 I don’t think there is a right or wrong way.

Whatever leads to building an audience, building trust and earning business is a good strategy.

I’ve seen it done in many different ways.

There are the social media personalities that post videos, photos and all kinds of crazy stuff from their personal lives. People follow. Then the person uses their celebrity to sponsor products or to sell tech stuff.

There are companies that share tips on Twitter. One tip every day or multiple tips each day as it relates to their industry. And over time they earn trust, people share the tips with others and the business gets new customers.

Another way to use Twitter successfully is one I use as a follower.

I follow about 15 people on my main Twitter feed. It’s a mix of a couple people in the business world and a few people in the golf world. I like to keep that feed pretty clean. I will experiment with 1-2 new people from time to time, but it’s been at about 15 for a few years.

Where I really use Twitter, though, is with the lists.

The list I use most often is a list for my favorite football team, the Green Bay Packers.

And you would watch the games on TV of course, but that was about it. Well, it wasn’t it. There was a lot of coverage, but then Twitter came along and if you’re not careful it’s turned into 24/7 access to all things football and your favorite team.

I have to watch it sometimes because you can get a constant stream of information.

That list has about 35 people on it and they’re mostly Packer reporters. Throughout the week these reporters are attending practices, press conferences, locker room interviews and much more. Oh, and the games of course. The reporters will tweet from the press box at games and mention little things like players limping that you wouldn’t see while watching on TV at home.

And it’s not just up-to-the-second news breaking stuff that makes the reporters valuable. That is valuable, but these reporters also tell followers what the news means.

Like if a player is injured and announced as out for the year. The reporter announces it, but then they go beyond and give some insight into what that means for the team the rest of the year. And for the player’s future.

They offer opinion, expertise and all kinds of value and they do it right on Twitter.

The first place you’ll look for what you want to “cover” is your industry. But that can be a big undertaking and you might want to look within the industry for something more specific.

In the NFL, there are reporters that cover the entire NFL. There are some that do it, but even still those reporters have a focus like only doing league-wide injury updates or only offering breaking news and not long-form commentary.

Then the majority seem to focus on specific teams.

You can do the same.

Find the right niche and make it your home.

Every reporter in the NFL has their sources. The sources are often people like scouts, coaches, players and many others. They might have an in with the local bartenders in the city where they work so they can get tips on when players are having a little too much fun or something like that.

It’s important to get to know people in your industry. You can use them for the latest breaking news, opinion and much more.

But your sources will also include websites, blogs, podcasts and other places where information will come out in your niche that your followers will want to have.

NFL reporters don’t really care about how often they tweet. In fact, I’ve seen some get temporarily penalized for tweeting too many updates during the games.

But fans go crazy when that happens. They’re following these people and they want more and more even when the reporter is typing too fast to keep up with what they’re seeing during the game.

When you’re sharing info your followers want there is no limit to how much you should share.

This where I think the real winning strategy comes into play. I really think that anybody can report the news. Who cares who gets a scoop first. Yeah, it’s important to know what just happened in the industry, but after a few minutes everybody will know anyway and they won’t care about the original source.

What they do care about is what the news means.

Tell your followers what news means for them and what they care about and you’ll really be offering something valuable.

NFL reporters do this very well. It’s sad, but players get injured. Anybody can report and injury, but the best reporters are the ones that provide smart analysis of what the injury will mean for the team going forward. How they’ll adapt and what fans can expect to see.

NFL reporters are always talking about the common stories. When a player is injured it’s something every reporter for the team has to cover, but each reporter is also looking for that angle or story that means something that everyone else has missed.

These stories often take more work and a longer time to complete, but when you find one and do the work you can really stand out.

NFL reporters often put in weeks and months working on stories. They’ll do features on a specific player or coach. They’ll go deeper into the story and come back with something that fans really enjoy and find interesting. It seems to be part of every reporter’s work to do the day-to-day stuff while also working on at least one unique angle and story at the same time.

NFL reporters have it pretty straightforward. They tweet during the games and fans eat it up.

You might be in an industry with important events. I would say it’s not as regular as NFL games, but just about every industry has conferences. Or even if you’re in the tech field you’ll see people live tweeting the Apple events each year.

When something is happening in your industry and niche make sure you’re there providing up-to-the-second tweets.

Finally, don’t overlook building your own web property. It’s important to build your following on Twitter. It’s a great channel, but you can use that authority and following to build something like a blog or website.

Reporters want followings on Twitter, but they ultimately want to bring people back to read stories on the newspaper’s website or to the blog or the radio show or whatever.

NFL reporters were the example for this post, but there are people doing this for many industries. However, I would say there is room for new people to do this in just about any industry and niche. Heck, there is still room for more to do it in the football world. I know that if there were more good Packer reporters I would probably add them to the list.

When you’re commenting continuously on a topic people care about they will never run out of a demand for your content.